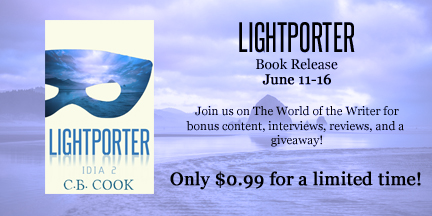 TODAY IS THE DAY, EVERYONE!!!! After almost two years, Lightporter is finally up for sale! The paperback copy should be up soon, and I may send out an update when that happens. I’m so excited to finally be able to share this book with you! I’m also really excited to be able to tell you about my next project. But first, here are all of the posts from the wonderful people who helped with the blog tour! If you haven’t read their posts, you should definitely go check them out.

These people were so awesome for helping with the tour! I also posted on here on my blog about the fan art and fan fiction contest, so you should definitely check that out as well! And, of course, don’t forget to check out Lightporter on Amazon.

So because of the release, I thought I would share a little bit about my current writing project on here. Yes, I will be starting on IDIA book 3 soon (I can’t wait!), although I may save that for NaNoWriMo this year, we’ll see. But currently I’m working on a non-IDIA superhero story–Christmas themed! I’m planning to release it in early December of this year if everything goes as planned, and it will either be a short story or a novella. I’m really excited about this new project, and hopefully I’ll have a title reveal coming soon! For now, you can find it on Goodreads.

I want to thank all of you so much for all of your support! You guys are amazing, and I couldn’t have done this without you! I’m working on coming up with a regular blogging schedule so that I can try to keep posting during the school semesters, so if you have any blog posts you’d like to see me write, let me know those ideas in the comments down below! I love to talk to you guys!

It’s been almost two years since Twinepathy released, and work on Lightporter has been pretty slow, but I’ve finally finished my edits, and I now have a release date for you!! *drumroll*

I’m so excited to finally be bringing you guys this book! It’s been a long time coming, but it’s finally here! If you would be able to help out with this release, please fill out the contact form below! And now for the blurb (FINALLY!) and some details!

n. someone who has the ability to manipulate light and can use that ability to teleport

Albany and her twin sister, Brooklyn, have gotten more comfortable in the superhero world. But when Blaze starts acting secretive and weird monsters attack, the girls realize there is more going on that they still don’t know about. Before long, they discover that Blaze is hiding something—or someone. With FOE still hiding in the shadows, the girls must decide who they can trust… before it’s too late.

Important things to know about the blog tour:

As always, if you have any questions, comment below! You can also share this graphic to get your friends excited about the release. 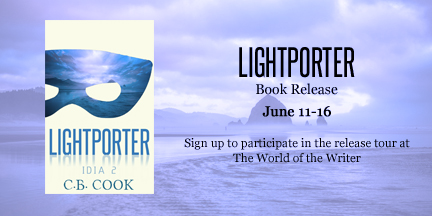 Click here to fill out the form in a new browser window.

I’m super excited about this release, and I hope you guys are too!! Comment below if you have any questions!

Hullo, everyone! Happy late Thanksgiving! I know I haven’t posted much lately, but I have some exciting news! Twinepathy has been nominated for TCK Publishing’s 2017 Reader’s Choice Awards! *throws confetti*

I’m super excited about this, but I need your help. Since this is a reader’s choice award, you can vote for Twinepathy to help it win. Just got to the contest website here, go to the YA/Middle Grade Book category (category 12), and vote for Twinepathy! The entries are in alphabetical order. It’s super easy and only takes a minute, and I would really appreciate your vote. Even if you haven’t read Twinepathy yet, you can still vote for it. Every vote helps!

I’d also appreciate if you could help spread the word! Post on social media, tell your friends, and spread the word. The contest is open until December 10, 2017, but don’t wait!

Thank you guys so much! 😀 Also, as a reminder, the Indie Christian Book Sale is now live, so go check it out and pick up some free or bargain books!

Hullo, everyone! It’s been quite a while since I’ve posted! With school and trying to squeeze in time to edit, I haven’t had much time for my blog. But today I’m happy to be hosting the Indie Christian Books site for a special Thanksgiving/Black Friday sale. I’m super excited about this, and although I wasn’t able to get my own books in the sale this year, I’m glad to help support other Indie authors! So here’s some more about the Indie Christian Books Black Friday Sale. 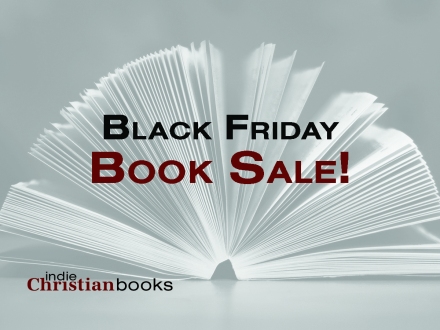 From Nov 24th through Nov 30th, a huge selection of independently published Christian books are on sale. You can find discounted paperbacks, dozens of books offered with free shipping, $0.99 ebooks, package deals and more. Even if your budget is depleted from Christmas shopping, we have some freebies for you! Need even more of a reason to support indie authors and fill your shelf with good stories? When you purchase a paperback book through indiechristianbooks.com you’ll be eligible to enter an exclusive giveaway including free books and an Amazon gift card!

You can meet our authors by visiting the Author Database on the website. Want to get to know the authors better AND have the chance to win some fun prizes? We’d love to have you join our week long Facebook party which will feature 39 authors over 7 days.

A note on the Ebooks Only page. Many of the books are listed as “Sold Out.” This is because we aren’t selling those directly through our site. Please click onto the product pages to find descriptions and links to discounted or free ebooks.

Acknowledgements: Thanks to Leah E. Good and Kendra E. Ardnek for their work organizing this sale, and Hannah Mills for her fantastic design work on the website graphics. Hannah can be contacted at hmills(at)omorecollege(dot)edu for more information about her design services.

Check out the giveaway here!

What books are you excited to get on sale? Have any on your Christmas list? Comment below with your favorite book you’ve gotten for Christmas!

Hullo, everyone! I’m so excited to be bringing you the re-launch of the Rise of Aredor series by Claire M. Banschbach!!! This series has been out for a while, and I’ve been dying to read both books, but then the publisher closed. Because of that, they were off of the market for a while, but now they’re finally be relaunched! I’m so glad to be a part of the tour. So let’s learn a little about the books, shall we?

The Rise of Aredor

Lost in a foreign land and separated from his family, Corin does his best to survive as a slave in the household of a Calorin lord. With newfound friends he fights for survival in ambushes and wars. For one act of bravery, he is awarded his freedom and returns to a home that has been invaded and ravaged by the Calorin armies. When Corin sets foot on Aredor’s shores, he has one goal in mind: find his family. He is driven into the forest, where he is reunited with childhood friends. From the shelter of the woods, they begin a spirited rebellion against Corin’s former cruel master, who now holds sway over Aredor. Follow Corin’s path in his quest to free his imprisoned brother, find a father who has vanished, and ultimately free his country in The Rise of Aredor.

The Wildcat of Braeton

His term of service to Lord Rishdah now complete, Aiden returns to his home in Braeton. As he travels he hears rumors that trouble plagues Braeton. Clan Canich is being attacked from within. He arrives, determined to save his father, his brothers, and his Clan from the treachery of one man.

A year has passed since the Calorins were driven from Aredor and Corin is struggling to rebuild his country. Despite the peace, a fear haunts him that the Calorins aren’t far away. The Hawk Flight takes to the forest again to defend the borders against a possible attack from the neighboring country of Durna and its Calorin ally.

As Aiden and Corin struggle to adapt to their new lives they know one thing for certain – war is coming to the North!

Claire M. Banschbach is a native West Texan. She discovered a deep and abiding love for fantasy and science fiction at a young age, prompting her to begin exploring worlds armed only with an overactive imagination and a pen while obtaining degrees in Kinesiology from Texas A&M and Physical Therapy from Texas Tech University.

She talks to fictional characters more than she should while struggling to find time for all their stories. She currently resides in Arlington, TX where she works as a Pediatric Physical Therapist.

And now for some fun celebratory things! There’s actually a Rise of Aredor giveaway going on, and all of the books are on sale for $0.99! Along with that, you can get a taste of the Aredor universe by checking out some short stories on Claire’s blog. Check out the rest of the tour posts below to see even more!

Emily Kopf – Review for The Rise of Aredor

Faith Blum – Spotlight for The Wildcat of Braeton

Hello, friends! Can you believe that Indie E-Con is already over??? It’s been a crazy, fun week, and I enjoyed every minute of it! If you missed the posts I did, you can still check them out. I’m doing my best to reply to comments, but sometimes the internet doesn’t like me. I was so excited to post about plot twists, Photoshop, and blogging! Don’t forget to check out some of the other authors’ posts. I didn’t get to read all of them, but the ones I did get to read were great!

And you remember how I mentioned the Indie E-Con Book Awards? Well, Twinepathy won two awards! First, it won Best Trip to Space (or Antarctica!), or the Best Sci-fi Award. The second award was the Best Set of Clues, or best mystery. Thank you all so much for your votes! 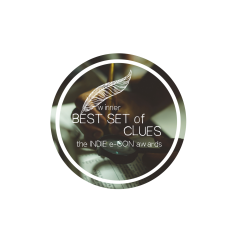 If you’d like to read more about the future of Indie E-Con, check out this link. And as a final reminder, Twinepathy is on sale for only a few more days, so pick it up while it’s still $0.99!

Thanks so much for your votes in the Book Awards! What was your favorite part of Indie E-Con? Are you excited for next year? Comment down below!

Why, hello, friends! It’s been quite a while, hasn’t it? I blame college. But I have a surprise! In case you haven’t noticed, today is Cyber Monday! I decided that today would be a great day to put Twinepathy on sale for only $0.99! If you haven’t read it or if you want an e-book copy for yourself, go ahead and pick it up now! The sale will only last through tomorrow. This is my way to thank all of you for all of your help and support! 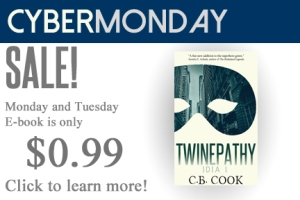 If you’ve already read Twinepathy, you can still help out by posting a review on Amazon, Goodreads, or your own blog, and by sharing about the sale. Thank you all!