If you’re like me, sometimes you realize that you spend more time with a notebook and pencil or a computer than your own family and friends. And while it’s important to write, and to pursue your dreams and passions, you shouldn’t shut yourself off from the real world. (No quotation marks there, people. I’m being serious.) So here are a few tips to help you not become a writing hermit. 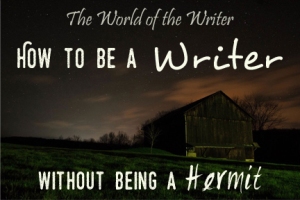 Tip #1: Include family and friends in the writing and editing process.

Ask your siblings what they think of your latest plot idea. Read some of your work out loud to your friends (and let them squeal with you over your awesome love interest or your wonderfully witty dialogue). Have your parents help you with editing and proofreading. Let people read your story! It’s no fun to do it alone, anyway. Why not let your friends and family help you out?

Yes, you may have over a hundred followers on social media. But nothing beats a real life friend you can write with. Not only do you not have to worry about being in different time zones, you can also meet at a bookstore! Or a coffee shop! Or go on a writing retreat into the mountains!

Tip #3: Step away from your story.

This is NOT procrastination. But I will promise you that it’s much, much more important to build a relationship with those closest to you than it is to sit in front of a computer writing (or doing something else like procrastination, if you’re stuck on your story). If you’re not writing anyway, why not go on a walk with your family? Or maybe make cookies and talk with your family while you eat them. Or *gasp* help your mom clean the house!

Hullo, everyone! Not expecting a post today, were you? This is going to be just a short update post with a few changes in store, so let’s get on with it!

The first update-change: I will be temporarily pausing posting of Twinepathy. Right now, I’m working on editing the story, and some things are being changed in parts that have already been posted. Because of that, I think it’s necessary to stop posting while I finish editing and get ready for a final once-over before publishing. (Soooo close, guys!) I know you guys are on pins and needles, but hang in there! You’ll get more soon, hopefully!

But in lieu of posting Twinepathy… What am I going to post? I’ll be sticking with the Monday and Friday posting schedule I’ve had, but with different posts. Monday will be writing posts, about writing and storytelling in general, and topics that you guys can request (Have anything you want me to post about? You can post in the comments below asking me about them!). I currently have ideas for some posts about lessons from Star Wars: The Force Awakens about writing–specifically symbolism and speculation, and probably suspense too. Gotta have those S’s. I also have a few ideas for analyzing Captain America: Civil War for some storytelling techniques. So Mondays will be a lot of fun!

On Friday, I’ll be posting one of two things. I’ll either be posting something related to Twinepathy (fanart, fanfiction, collages, snippets, something like that) OR I’ll post something else I’ve written, like a short story or a fanfic. I’m currently brainstorming a fanfic for Civil War… Bucky and Sam are awesome, am I right?

So those are the changes that will be going on in the next few weeks. I hope you guys understand and enjoy the new schedule! I’ll leave all of you with this awesome collage that writefury made (You can check out some others she did for her own characters and other stories on her blog here.): 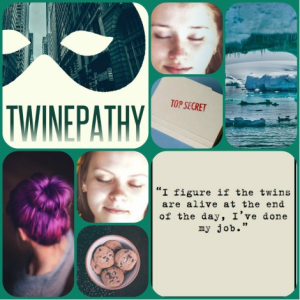 Hullo, everyone!!! As the title says, I have HUGE news for today!

I HAVE FINISHED WRITING TWINEPATHY!!!!!!!!

I think that’s worthy of some dancing and celebration, don’t you? 😀 It’s been about five or six months since I started, and I’ve found that I really enjoyed writing this story! Now comes the hard part – the editing. We’ll see how that goes! 😉

In the meantime, enjoy a special extra part for today! (See part one if you’re new!)

I nod. “Yeah, you know, pretty, tall, purple hair…” Jen gives me a look and I clamp my mouth shut.

“She’s on a little mission. Why?” Jen asks, almost suspiciously.

“She was on a date with our brother and had to cancel,” I explain, tilting my head.

Jen nods. “This is more important than a date. And speaking of that mission…” She gives Blaze a pointed look, and he leaps to his feet.

“All right, let’s head back out to the lobby.” He begins herding us toward the door, motioning for Keller and The Finch to follow. We pile out of the office, leaving Jen alone at her desk. Blaze shuts the door behind us. Com glances at us disinterestedly, and Blaze leads us down a side hall that we haven’t been down before. The Finch and Keller follow us, Keller because she has no choice and Finch probably because he doesn’t have anything more exciting to do.

Blaze holds open a door, and we step into a large room with a bunch of circular tables with chairs around them. Quite a few people are in the room, talking, working, or just hanging out. Blaze has us sit down at a table and then teleports to who knows where, leaving us in awkward silence.

I glance at Brooklyn as she scoots her chair around to sit next to Keller. She starts by introducing herself, and before I know it, they’re having a casual, friendly conversation. Who knew? I look around for Maddie and notice that she’s talking to Finch. You’d never put the two of them together if not for their similar amnesia experiences.

Blaze reappears suddenly, a huge grin on his face and two boxes of donuts in his arms. He sets them on the table and slides into the chair next to me. “I hope you guys like donuts. You’d better get what you want before everyone else catches the scent.” He winks and plops two chocolate-glazed donuts on a napkin.

Brooklyn reluctantly takes a donut, probably thinking about how guilty she’ll feel later. Keller refuses, and Maddie takes a plain one. Finch grabs a couple, and I take a chocolate one, too. Might as well.

The other two conversations resume and Blaze turns to me. “So, how are you?” he asks in a conversational tone.

“Oh, I’m doing just wonderful,” I reply sarcastically – my go-to response when anyone asks me how I’m doing. “My sister is stressed out and keeps having monster headaches, there’s a serial amnesia-causer on the loose, and I’m…” I trail off grumpily.

“You’re not doing so hot, either, but no one’s really asked about that,” Blaze finishes, lifting an eyebrow.

“No,” I retort. “I’m frustrated with everything and all I want to do is hit something. Hard. Preferably whoever messed up my wonderful life.”

“So… Data, then?” Blaze says skeptically.

I pause. “Well, no. More like this amnesia-causing person.”

“Well…” he says slowly. “Not all jokes have punch lines.” I groan, and he leans forward earnestly. “Really, Albany, when’s the last time you let loose and had a little fun?”

I shrug. “The last time it was appropriate.”

Blaze sighs, but then gets a twinkle in his eye. “If I take you to where Ezra is, will you promise to do something fun soon?”

I narrow my eyes at him as his question sinks in. “Are you asking me out?”

I give him a skeptical look that turns to curiosity as I see the hardness and distance that has taken over his expression. “What? Why not?”

Blaze shakes his head, and his expression nearly returns to normal, but it lacks its usual spunky, mischievous look. “Never mind. But will you?”

I pause, curiosity heightened, but I stuff it down. “Sure.”

He grabs my arm, and we teleport.

Hi, everyone! Today I was sort-of tagged for the 777 challenge by Lynette Noni!

The 777 challenge requires you go to Page 7 of your work-in-progress, scroll down to Line 7 and share the next 7 lines in a blog post. Once you have done this, you can tag 7 other bloggers to do the same with their work-in-progress.

Since my two main stories that I’m working on are still in the plotting stages, I decided to share from the story I’m currently editing. This worked out perfectly to the first time we see the villain! And don’t worry, you’ll be hearing more about this story soon.

Marba wove her way down the hallway between the small groups of people. They didn’t pay any attention to her, and she repaid them with the same treatment. You could tell which trainees were new; they were the ones who stared at her in awe as she walked past. Most of the seasoned trainees, and those who had completed training, had grown used to her commanding stature.

“Marba,” an authoritative voice called from behind her. The very sound of that voice was enough to silence all of the conversation in the hallway.

What a perfect ending! 😀 Now for those people I tag…

And if you’re reading this, I tag YOU as my seventh person! 😀

What did you think of the excerpt? Are you going to do the challenge? Well, are you????

In celebration of finishing the first vague round of editing.

“You have opposed me. For this, even though you have proved that you have the brain of a bug and the imagination of a plumber, you still must be punished.”

No no no. Don’t worry. I’m not finished with writing. I’m just finished writing one thing.

My longest story yet.

Now, I have a ton of editing left to do, which will probably be more than I’m estimating at the moment since I am a *cough cough* perfectionist, but it’s still going to be a while before I’ll be completely finished with it.

But I’m done. Words? 20,669 of them, if you count the prologue and the chapter headings. Pages? 75. So no, it’s not quite a novel. Not even very close. But considering my longest story is 49 pages long, I think this is quite an accomplishment. Plus, I’ve got plenty of description and scenes to add, so maybe the word/page count will jump even more. 😀

For now, at least, I’ll be taking a little time off to be working on some other writing/reading related projects, and prepping for school before I start editing. There’s still a lot to do, but I’m planning on relishing this feeling of accomplishment!